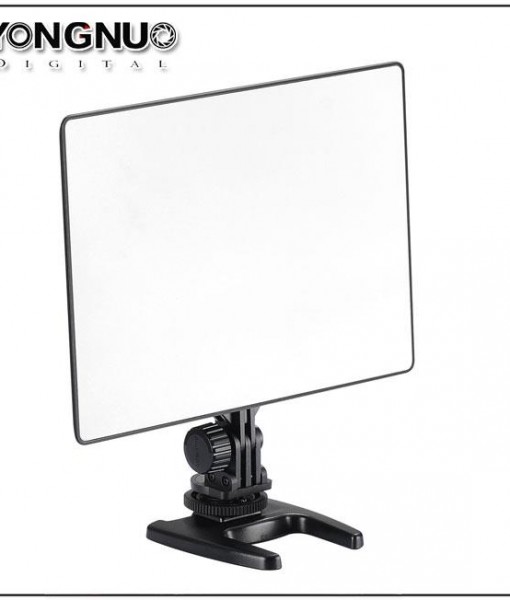 Yongnuo YN300 AIR 3200-5500K LED Light For Canon, Nikon and other DSLR cameras. This YN300 AIR is the latest LED light product from Yongnuo. It is only 22mm thick and with low weight of only 250 grams it is ideal for mounting on cameras. High color rendering index of more than 95% helps keeping the colors of the subject faithfully.

Lighting is a critical component of any video production. A small light kit like the Yongnuo YN300 AIR or Yongnuo YN300 will cover you for most situations. If you shoot weddings, generally speaking, the carefully designed atmosphere of a wedding is someone else’s job, and your job is to capture it as naturalistically as possible. That is one of the reasons why low-light performance is such a high priority for video cameras. Lighting a wedding is almost always a less than ideal situation for a videographer, but it is, in certain situations, a necessity. At the very least, you will want to have some kind of on-camera light in your kit. Yongnuo YN300 AIR or Yongnuo YN300 are ideal LED Lights for those situations.

The device has adjustable color temperature range from 3200K to 5500K. Yongnuo YN300 AIR provides 96 LEDs for illumination angle of 110 degrees. Light output and color temperature can be adjusted smoothly using the control knob. The lamp is equipped with a control condition of the battery and power indicator. All data is displayed on the LED indicator. Yongnuo YN300 AIR LED Light is ideal for illuminating close of plans and when shooting portraits. Yongnuo redesigned the entire structure of the lamp.

Hot-shoe adapter is included so you can mount the lamp directly on the camera or camcorder. Screw thread 1/4 “placed in the cradle can be mounted on a standard photographic tripod. In addition, a comfortable grip “handle” allows you to hold the lamp in his hand and mounted on tripods.

You can lock in your preferred settings by the press of a button. Next time you use the light just hit the button and the light will return to it’s previous power and color balance. Yongnuo YN300 AIR is equiped with advanced high quality LED’s to eliminate flicker often found in lower quality video lights.